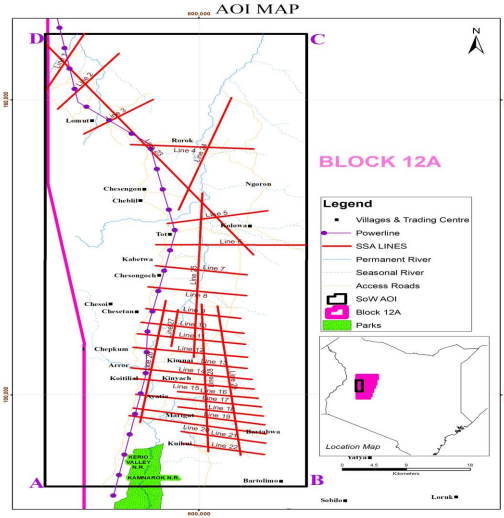 According to a source the survey carried out by Chinese geophysical service company BGP International since April 2018 covered Baringo, Elgeyo Marakwet and West Pokot counties and is expected to help the operator better understand the block and map other prospects. It is unclear as to whether the earlier plans to acquire about 528 (surface) line km of 2D seismic from 29 lines were kept as attempts to reach Delonex by OilNews Kenya were unsuccessful.

According to the specific site assessment by former Block 12A operator Tullow Oil the seismic survey was to focus on covering the un-surveyed area in the north and to infill a previous 2D seismic survey that was acquired by the company in the same block in 2013.

The seismic was to replace the earlier planned FTG programme over the block in mid 2016 to gain further data on  these  prospective  areas of which the Ministry of Energy and Petroleum had approved a new work programme submitted by the then joint venture partners involving carrying out a Full-Tensor Gravity Survey over the block to optimise the location of the exploration well and thereby maximise its chances of success in March 2016.

Block 12A saw its first well Cheptuket drilled in 2016 which according to then operator Tullow Oil established a petroleum system in the unexplored Kerio basin the first by the company outside the South Lokichar basin. According to Tullow the exploration company identified 700 meters of oil shows in cuttings and rotary sidewall cores. Cheptuket-1 well the first well to test the Kerio Valley Basin reached a final depth of 3,083 metres and was drilled by the PR Marriott Rig-46.

Delonex holds a 60% in Block 12A consisting of an exploration licence covering a total area of 15,390 km2.