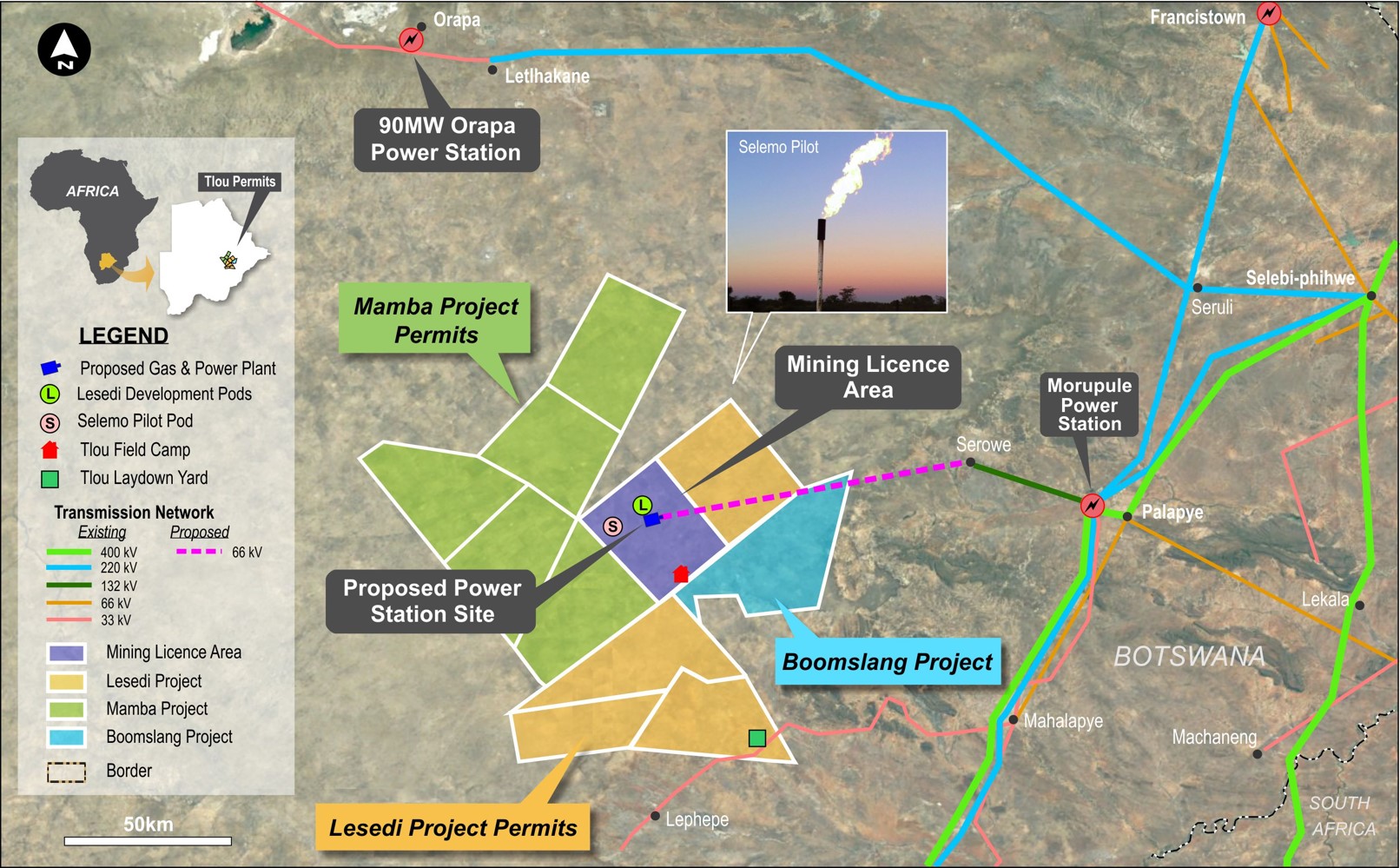 The Company has three project areas in Botswana:

The Lesedi project has all approvals in place to allow development to commence. The first phase will be a 10MW power project with electricity to be sold to Botswana Power Corporation.  Once in full production, 10MW of generation could provide annual revenue of approximately US$10m.

During the quarter the Company signed a 10MW Power Purchase Agreement (PPA) with Botswana Power Corporation (BPC). Under the terms of the PPA, BPC will purchase up to 10MW of power generated at Tlou’s Lesedi power project.

The principal terms of the Convertible Note Agreement are as follows:

The funds are planned to be used to finance the construction of transmission line infrastructure to connect the Lesedi Project to the power grid, installation of generation assets, and ancillary costs to facilitate power generation and sale of electricity.

The status of the Lesedi area licences is as follows:

The Mamba project consists of five PL’s covering an area of approximately 4,500 Km2. The Mamba area is situated adjacent to Lesedi. In the event of a gas field development by Tlou, the Mamba area provides the Company with flexibility and optionality.

The Mamba project is in the exploration and evaluation phase with further operations required on these licences. The next stage of exploration is likely to be core hole drilling. Positive results from operations at Mamba could expand the reserves footprint across Tlou’s project areas.

In the event of successful development at Mamba, it is envisioned that this area would be developed as a separate project from Lesedi, with the potential for gas-fired power, solar power and hydrogen production.

The status of the Mamba area licences is as follows:

To date, the Company has not carried out ground operations in the Boomslang area having only received environmental approval to commence exploration activities in 2021. A renewal application for the Boomslang licence was submitted in December 2021.

The status of the Boomslang area licence is as follows:

The Company’s hydrogen technology partner Synergen Met Pty Ltd has informed the Company that during the quarter, preliminary engineering for their hydrogen-carbon production process was completed. The plasma torch will be tested and configured to optimize hydrogen and solid carbon production.

The use of plasma technology for hydrogen production will be a first for the sub-Saharan region and could be advantageous for the production of low emission, clean energy across the region as well as in the related fields of waste-to-energy and waste disposal.

Tlou and SM intend to use the hydrogen produced from the prototype to generate electricity and possibly for transport fuel. Solid carbon will be made available for regional consumers that require the product. World markets for hydrogen and solid carbon black are predicted to expand considerably over the short and medium-term.

SM considers that their process meets the definition of green hydrogen production via their plasma torch gas pyrolysis design.

During the quarter the Company held discussions with an international crypto mining organization to use Tlou’s electricity to mine cryptocurrencies such as Bitcoin. The Company is evaluating the merits of this possibility which could lead to another avenue to generate income from Tlou’s gas. The potential exists to generate revenue from this project while the grid connection infrastructure is being built.