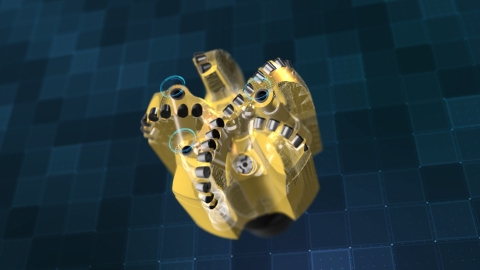 Hughes has announced the commercial release of its TerrAdapt adaptive drill bit, which can deliver dramatic improvements in drilling economics by using automation to mitigate downhole dysfunctions that cause inefficient drilling and costly tool failures. With the industry’s first self-adjusting depth-of-cut (DOC) control elements, the TerrAdapt bit automatically changes its aggressiveness based on the formation through which it is drilling to mitigate vibrations, stick-slip and impact loading. For operators, this means faster, more consistent rates of penetration (ROP), longer bit/tool life and significantly reduced non-productive time and invisible lost time.

The vast majority of well intervals are drilled through a variety of formations containing layers of different rock types, however, current polycrystalline diamond compact (PDC) drill bit designs feature a fixed DOC control setting that is optimized for only a single rock type. A fixed-DOC bit will drill smoothly in some areas but will perform erratically and inefficiently in others because of vibrations that occur when the bit transitions between different rock types, causing stick-slip. During stick-slip events, the bit’s bite becomes too aggressive, causing it to “stick” and stop rotating, while the drill pipe behind it continues to wind up like a spring until the bit releases, or “slips,” and begins spinning uncontrollably. These stick-slip events dramatically increase drilling costs by reducing ROP, and can seriously damage the bit and other expensive mechanical and electrical bottom hole assembly (BHA) components. When this happens, operators have to make extra trips to replace the bit/BHA, or continue to drill with diminished performance.

The TerrAdapt bit incorporates self-adjusting DOC elements that autonomously extend to create an optimal DOC based on the formation, preventing vibrations and stick-slip when the bit transitions between rock types or sections. When the risk of stick-slip has passed, the elements retract, enabling drilling to resume at a maximum ROP. The elements also absorb any sudden shock to the bit face, significantly reducing damage to the TerrAdapt bit’s cutters and other BHA hardware and electronics.

“I believe the TerrAdapt adaptive drill bit is going to deliver a step-change in our customers’ drilling efficiency,” said Scott Schmidt, Vice President, Drill Bits at Baker Hughes. “Stick-slip, which has been costing them millions of dollars each year, can now be easily avoided. So, instead of worrying about how to handle stick-slip or figuring out how to deal with its consequences, our customers can focus on their real business—drilling fast, trouble-free wells.”

In the Delaware Basin, a TerrAdapt bit recently demonstrated its value by increasing a customer’s ROP by 27 percent compared to the average ROP on offset wells drilled through the same interbedded formations. The bit reduced torque variations by 90 percent, indicating dramatically reduced stick-slip—enabling the operator to drill 713 ft (217 m), or 27 percent, farther and use significantly less energy than on the nearby wells drilled with traditional PDC bits.

This TerrAdapt bit is the first in a new line of adaptive bits that Baker Hughes is developing to help operators address various drilling dysfunctions, improve performance and reduce costs.