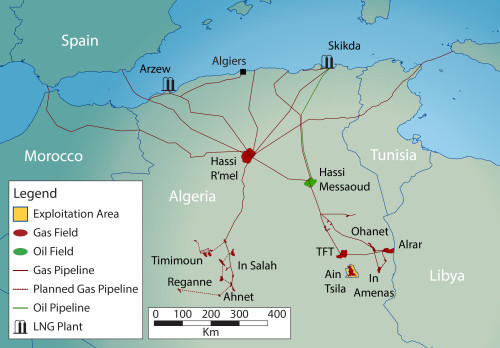 Wintershall Dea continues to strengthen its presence in Algeria. As of 4 May, the company has entered into a sale and purchase agreement to acquire Edison’s 11.25% participating interest in the Reggane Nord natural gas project. After the transaction is closed, the consortium Groupement Reggane Nord (GRN), operator of the project, will comprise Sonatrach (40%), Wintershall Dea (30.75%) and Repsol (29.25%).

Algeria has significant energy potential. The country is the third largest exporter of gas to Europe, after Russia and Norway; and is the largest natural gas producer in Africa. Algeria is a prime candidate for an enhanced energy partnership with Europe, particularly at this critical time. Located just across the Mediterranean, the country has well developed infrastructure connections to Europe. These include two subsea gas pipelines and LNG facilities at two locations. In the long term, the country has major potential for climate-friendly hydrogen, solar and wind power, and carbon capture and storage.

On that basis, Wintershall Dea wants to grow in Algeria. Dawn Summers, Chief Operating Officer and responsible board member for Middle East and North Africa says: “Algeria holds great potential for natural gas production and future energy projects. That is why we want to grow our presence in Algeria and contribute to the development of its energy sector. Increasing our interest in the Reggane Nord project is a first step.”

Thomas Ruttmann, Senior Vice President and Managing Director for Algeria, adds: “Wintershall Dea has always been an active partner in the Reggane Nord project, and we are pleased to strengthen our role. The project has been reliably producing low-cost natural gas since 2017 and has a long future securing energy supply in Algeria and the region.”

The transaction is subject, among others, to customary authority approvals.

It comes after Wintershall Dea and Sonatrach recently extended a Memorandum of Understanding to consider new business opportunities in the field of gas production and low-carbon energy solutions. Wintershall Dea first entered the Algerian market in 2002 and subsequently became a partner for the Reggane Nord project. The project comprises six gas fields over an 1,800 km2 area in the Southwest of the country. The operator GRN marked first gas in 2017 and the project is expected to be in production until at least 2041.