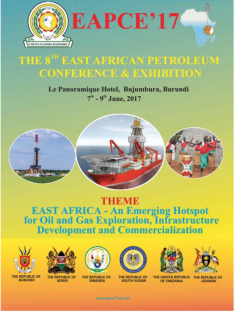 The main objective of the Conference and Exhibition is to promote investment in the oil and gas sector by demonstrating to the world the potential that lies within the region and sharing information on the status of development of the sector in each Partner State.

The three day Conference that was earlier set for March offers a wide range of technical presentations reflecting developments in the oil and gas industry in East Africa and around the world. The Conference provides a forum for discussing the legal and policy framework and the overall business environment prevailing in the region. It gives stakeholders in the oil and gas sector an opportunity to interact with EAC senior government officials and decision makers.The Conference and Exhibition programme integrates field excursions to selected sites in each Partner State for delegates to see the rich geological variety that the region possesses as well as the touristic attractions that the region is well known for. The exhibitions and field excursions have become a popular feature of the Conference, attracting more and more participants with each successive Conference.

The conference will also focus on Burundi’s nascent oil and gas sector where various studies have been conducted since 1959 on the Rusizi basin and the Lake Tanganyika basin part of the East Africa Rift system. This basins have been divided into four blocks namely Block A onshore in the Rusizi basin and offshore Blocks B, C and D at the Lake Tanganyika basin.Block A and B are available for licensing to potential investors while C and D have been licenced to A-Z petroleum and Surestream Petroleum respectively.

Rwanda which has had exploration activity since 2007 at the Lake Kivu area also hopes to attract investors to explore for oil and gas.Rwanda has been working on the legal and regulatory tools with the law governing petroleum exploration and production activities already gazetted. The upstream policy is also being revised. The ministry of natural resources has been in the hiring process of the petroleum company to undertake 2D seismic activity at the Lake Kivu area. Lake Kivu has an estimated 250 billion m3 of dissolved carbon dioxide and 55 billion m3 of methane gas. A 2MW power plant is already in place as a pilot project with other investors also having shown interest in processing of fertilizer and liquid fuel.