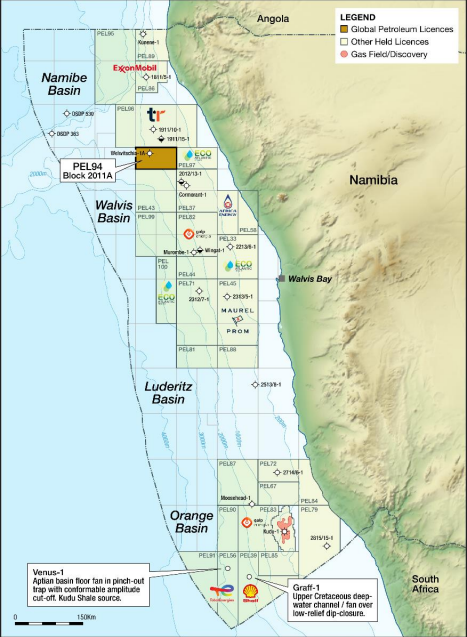 On 25 April 2022 the Company announced that that the Namibian authorities had granted a one year extension to the Initial Exploration Period of PEL 94 until September 2023, also making the observation that the Venus and Graff discoveries heralded a major new petroleum province in Namibia.

Global also notes the completion by Shell of the La Rona-1 well, which was drilled immediately following the Graff-1 discovery well and close to it. The Shell wells are located – as is Venus-1X – in the Orange Basin, southern Namibia.
Although no formal announcement has been made by Shell, reports suggest that Graff and La Rona have discovered significant volumes of oil and gas in two reservoirs. Shell has stated that it will drill more appraisal and exploration wells in order to prove commerciality and to design the optimal development plan.

Unsurprisingly, interest in Namibian offshore exploration has risen unprecedentedly – a development which has become evident to Global in the course of its farmout of PEL 94, and also to industry observers generally.

As previously indicated, a consequence of the TotalEnergies and Shell discoveries is that companies, particularly potential new entrants, are taking significant time to evaluate the geology and petroleum systems offshore Namibia.

Whilst focus is understandably intense in the Orange Basin – especially in the region of the discoveries – Global’s view is that oil-prone opportunities there are both limited and likely to be very expensive.

The Company believes that the Walvis Basin, where PEL 94 is situated, also has the potential to be extremely successful, but has the advantage of much shallower water depths generally than the discoveries in the south.

Global believes that there is commonality of both source and reservoir between the two discoveries in the Orange Basin and PEL 94. A presentation given by Global at a recent industry workshop in Namibia, regarding mapping of the source rock and migration of oil and gas from it, was well received and has generated additional interest in the PEL 94 data room process.

“In Namibia, although companies will naturally be looking first at the Orange Basin, we are encouraged by the quality of the parties who have shown interest in our farmout of PEL 94. Our analysis is that there are very few attractive, available blocks in the Orange Basin and there is great competition for them. We think that Global holds one of the most prospective blocks in the Namibian offshore for the reasons we set out in this Announcement, and we firmly believe that our patience will pay off.”